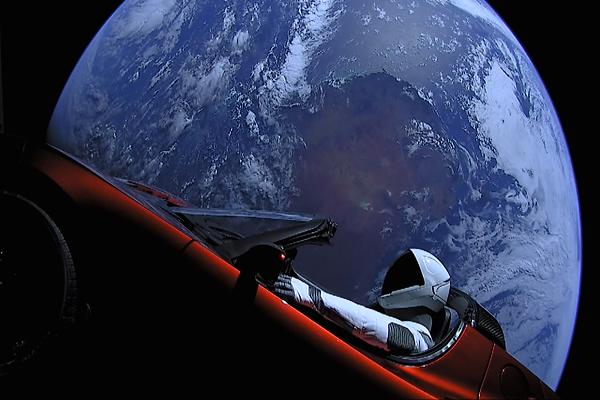 This image has become a proof of that historical moment when Elon Musk Tesla Roadster and Starman Flying Through Space Leaving Earth. This is the Last pic of Starman in TESLA Roadster on its journey to Mars orbit and then the Asteroid Belt. Musk’s SpaceX launched the Falcon Heavy rocket Tuesday to much fanfare. The 27-engine behemoth is the most powerful rocket in use today. Its successful launch was a significant step forward for SpaceX and Musk’s eventual goal of sending people to live on Mars.

To make the rocket launch more entertaining, Musk put his own cherry red Tesla Roadster in the rocket to be released into space. And SpaceX, for a limited time, was able to provide a live video feed of the Tesla floating through space.

The photo that Musk shared on Wednesday was the last picture the company captured of Starman soaring through space before the connection was lost. This animated video from SpaceX, embedded below, shows how the Tesla roadster was released into space from the Falcon Heavy rocket.ac.

On Wednesday, Elon Musk shared the last picture SpaceX was able to get of the cherry red Tesla it sent into space with a mannequin driver, “Starman.”. It’ll reach its farthest point from the sun in November, and in September 2019, it will complete its first full loop around the sun. It’ll continue to complete one full orbit about every 19 months SpaceX also release few more amazing breathtaking pictures :

Musk said Tuesday that the batteries for the cameras were only expected to last 12 hours, so this is likely the last we’ll see of the Roadster and Starman.