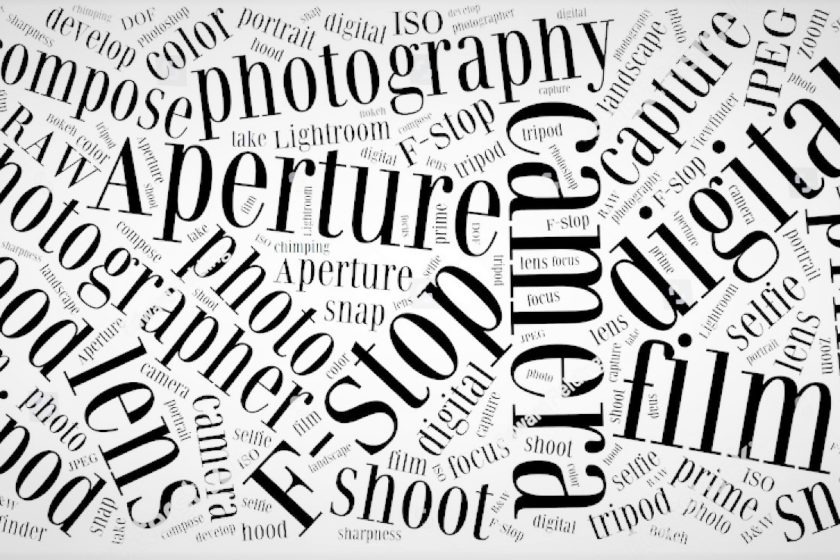 Learning Photography from beginning is  a tough task. When you will try to explore Internet you will get to meet all kinds of technical jargon which could be alien for you. Understanding the common photography terms and definitions is a crucial step towards improving your photography skill as a beginner. We will see Useful Photography Terminologies in this blog.

While there are 100 of terms used in photography.  Here I will be explaining some most important Photography Terms Beginners Need to Know.

Below are list of some Useful Photography Terminologies for Beginners Need to Know :

Its one of the 3 basic pillars of photography, other two are ISO and Shutter Speed. Aperture is a opening or a hole which control the amount of light reaches to its sensor. It also controls the depth of field with blurred background or bokeh effect.  Aperture is measured in f-stops; a small f-stop like f/1.8 is a wide opening, a large f-stop like f/22 is a very narrow one. Aperture is one of three camera settings that determine an image’s exposure, or how light or dark it is. Here is the link to my dedicated blog on Aperture (Understanding Aperture for Beginners) with sample images and camera settings.

Like its name, its a physical shutter which opens and exposes camera sensor to light, and then closes as per your shutter speed. The length of time that shutter keeps open is called the shutter speed and also sometimes referred to as ‘exposure time’. We generally measures this in seconds. The shutter speed scale is generally half or double of its previous value and gradually it can go as fast as 1/2000 or 1/4000 or slowest can be 30 sec. Here is the link (Shutter Priority Mode Explained in DSLR) to my blog which explained Shutter Speed with examples.

Its is one of the three components which controls exposure or the amount of light which reaches to image sensor inside camera. It has international standard to measure sensitivity meter across all cameras. ISO is the measure of the camera’s sensitivity to light. The lower it is, the less sensitive your camera is to light, and vice versa. So, you can use higher ISO for getting shots in low light. The trade off is that images at high ISOs appear to be grainy and have less detail. ISO is balanced with aperture and shutter speed to get a proper exposure. Link to ISO (Understanding ISO for Beginners) blog here.

That’s the button (or shutter button) you press to take the picture. It allows you to point n focus n shoot. Half pressing this button will focus on subject and pressing further way down will click the pictures.

Exposure is how light or dark an image is. An image is created when the camera sensor is exposed to light—that’s where the term originates. A dark photo is considered underexposed, or it wasn’t exposed to enough light; a light photo is overexposed or exposed to too much light. Exposure is controlled through aperture, shutter speed and ISO.

The most common standard term used to define how Aperture, ISO and Shutter speed are related, is known as Exposure triangle. One must balance all these 3 factors to get the desired result with properly exposed image. All 3 terms are inter-related to each other and changing value for one might affect other as well. Click here (What is Exposure Triangle) to know more about Exposure Triangle.

Exposure Compensation is something through which you are telling your camera that yes I can understand what’s your calculation of exposure but still I want this image to be little darker or brighter. This functionality doesn’t completely overrides the exposure algorithm of camera but its just used in case where you are not happy with the final result and you want one stop brighter or darker image. Find Exposure Compensation in details here.

The file format is how your camera lens will record the image or image file. Raw files contain more information than JPGs, which makes them more suitable for photo editing in various editing software. Let’s explore more on RAW vs JPEG story.

When your eyes focus on an object that’s close to you, the objects far away will appear blurry. The common photography term “focus” has the same meaning. Something that is in focus is sharp, while an object that is out-of-focus isn’t sharp. Different focus areas determine if the camera is focusing on multiple points or one user-selected point. Here (Focusing Modes In Photography) I have explained all focusing modes in photography.

Bokeh is the term created when lights are out of focus in an image. It’s a neat effect to have in the background of a photo, created through wide apertures. It will have an interesting effect on your image quality. Aperture is what creates a Bokeh effect in your photograph, Click here to know more on how to achieve it.

We generally take one photo at a time. Or, you can turn the burst mode on and the camera will continue snapping photos as long as you hold down the button, or until the camera memory buffer is full. Burst speeds differ based on what camera or film camera you own, some are faster than others. Just how fast is written in “fps” or frames (pictures) per second.

Have you ever wondered why sometimes everything is so yellowish, blue, orange or purple in photograph which looks very unnatural. This means you have not selected the correct White Balance as per the current lighting situation or scene. There’s an auto white balance setting, but like any automatic setting it’s not always accurate. You can use a preset based on what light you are shooting in like sun or tungsten light bulbs. Click here to know more about What is White Balance and How to change it.

Metering is actually based on a middle gray, so having lighter or darker objects in the image can throw the metering off a little bit. Metering modes indicate how the meter is reading the light. Matrix metering means the camera is reading the light from the entire scene. Center-weighted metering considers only what’s at the center of the frame and spot metering measures the light based on where your focus point is. Here’s a detailed blog on How to Get Correct Exposure – Camera Metering Modes Explained.

Noise is simply little flecks in an image, also sometimes called grain. Images taken at high ISO have a lot of noise, so it’s best to use the lowest ISO you can for the amount of light in the scene.

That’s the hole you look through to take the picture. Some digital cameras don’t have one and just use the screen, but all DSLRs and most mirrorless cameras use them.

A time lapse is a video created from stitching several photos together taken of the same thing at different times. Don’t confuse a time lapse with a long exposure, which is a single image with a long shutter speed.

Digital zoom means the zoom is achieved through software, not physical parts of the camera moves. Optical is always better than digital. These terms are usually used when referring to a zoom lens (on a compact camera) as well as image stabilization.

Hot shoe is the slot at the top of a camera for adding accessories, like the aptly named hot shoe flash.

Aspect ratio is simply the ratio of the height to width. An 8 x 10 has an equal aspect ratio to a 4 x 5, but a 4 x 7 image is a bit wider. You can change the aspect ratio in your camera if you know how you’d like to print your image, or you can crop your photo when you edit it to the right ratio.

Macro photography is that which is taken with a dedicated macro lens. A real macro lens has the capability of achieving in the least a 1:1 magnification. 1:1 magnification means, subject is depicted on the digital sensor in its actual size. Just because a camera has the word macro written on it, doesn’t make it a true macro lens. Here are some of the best and cheap method to achieve macro results.

The rule of thirds is the most basic composition guidelines while shooting. In Rule of Third we divide our image into nine equal squares with 2 horizontal and 2 vertical lines span across image. These nine squares help in composition of image while shooting, cropping or uploading.

It uses the natural tendency of human eyes to be drawn toward certain parts/angle of an image. As a photographer, it is a best way of making sure you focus on what viewers wants to see. This theory applies to any subject in any condition to improve the composition and it produces images which are more engaging to human eyes and better balanced. Click here to know PHOTOGRAPHY COMPOSITION RULES – BALANCING RULE OF THIRDS IN PHOTOGRAPHY.